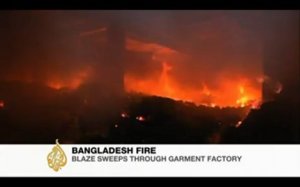 On Saturday, November 24th, 2012 there was yet another fire in a Bangladesh garment factory.  This time 111 workers lost their lives and an additional 100 workers were injured when fire swept through the Tazreen Fashion Ltd. factory on the outskirts of Dhaka, the capital of Bangladesh. 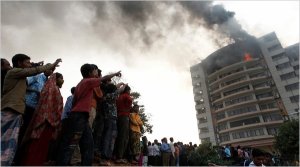 This is particularly troubling considering that on December 13, 2010 a fire at the Ha-Meem Factory in the Ashulia industrial area, about 16 miles from the capital, killed at least 20 workers  This fire began during lunch so most workers were outside at the time or the death toll would have been much higher.

On February 25, 2010 there was another fire at the Garib and Garib Newaj Garment factory in Gazipur.  21 workers were killed and another 50 were injured in a fire that blazed for over two hours.

Has anything changed in the two years since these previous fires?  It would seem not except that the number of lives lost keeps increasing!  There are many groups to blame for unsafe conditions that are allowed to continue.  Certainly the Bangladesh government needs to improve regulations in these factories; Bangladesh is the second largest apparel supplier. The factory owners are to blame for not improving the safety conditions in their factories. I also believe that the companies/brands who utilize factories that are known to turn a blind eye to safety infractions are also culpable here.  Money talks and if large orders are pulled from unsafe factories, then I believe changes will occur. Otherwise there appears to be no incentive for the factories or the Bangladesh government to act.

For more coverage of this story, follow the links below:

The Associated Press Wal-Mart Distances Itself From Fire in Bangladesh November 26, 2012

International Herald Tribune – The International Edition of The New York Times Another Deadly Fire, Another Alarm for Bangladesh November 25, 2012

Fairwear until next time……